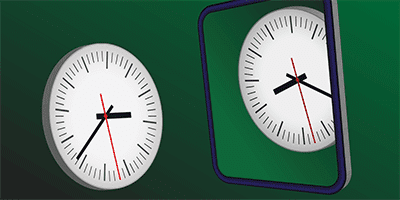 Since 1998, physicists have explored a modified quantum theory based on spacetime reflections. This so-called 𝒫𝒯symmetric theory makes certain predictions—such as time shortcuts in the evolution between two states—that conflict with conventional quantum mechanics, while still being compatible with observations. However, a new assessment of this alternative model suggests that it is fundamentally flawed. In Physical Review Letters, the authors show the 𝒫𝒯 symmetric theory violates the proscription against faster-than-light communication.

A basic tenet of quantum mechanics is that the Hamiltonian equation describing the energy in a quantum system should have a mathematical property, called Hermiticity, so as to guarantee that the predicted energy values are all real. But one can ensure real energy values another way, by insisting that the Hamiltonian is symmetric to a combination of reflections in space (𝒫) and time (𝒯). In the past, researchers have used the 𝒫𝒯 symmetric model to describe certain optical systems.

If 𝒫𝒯 symmetry were actually fundamental—replacing the Hermiticity constraint—then radical consequences would arise, such as quantum systems evolving faster than normally predicted. But a challenge to this notion comes from Yi-Chan Lee of National Tsing-Hua University in Hsinchu City, Taiwan, and colleagues. They consider two implicit assumptions in the 𝒫𝒯 symmetric theory, involving how it is locally defined and how its predictions are computed. They put these assumptions to the test with a classic thought experiment, in which Alice and Bob share two entangled states. By choosing how she measures her state, the team found that Alice could send information to Bob faster than the speed of light. The authors believe this result rules out 𝒫𝒯 symmetry as a fundamental theory, but it still could be useful as an effective theory and an interesting model for open systems in classical optics. – Michael Schirber